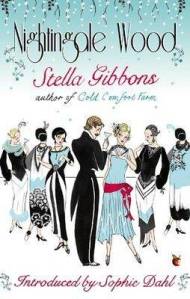 Nightingale Wood is a fairytale says the cover, and yes it is.

The story of Cinderella, set in the 1930s, still recognisable but twisted into something new and something just a little bit subversive.

Viola is a penniless young widow. She is pretty and charming, but sadly her circumstances force her to move to the country to live with her in-laws.

The Withers family is terribly middle class and stifling respectable, and though Mr and Mrs Wither do not consider Viola, a former shopgirl, to be quite of their class they know their duty. Mr Withers is most concerned about Viola’s finances and his wife about her family’s perception and position in local society.

Their unmarried, middle-aged daughters are a little less concerned. Madge wants little more than a dog and to be part of the country set, while Tina is quite besotted by Saxon, the family chauffeur.

The family and its interactions are presented with gentle wit and humour, but the sadness is just below the surface. Sadness at a lack of understanding and at a class system that keeps them all in their places and allows so much potential in the women of the household to be wasted.

A few miles away live the Spring family. Mrs Spring is proud of he successful son Victor, ambitious for him, and delighted that he is virtually engaged to an eminently suitable young woman. Her bookish young niece, Hetty is less impressed.

Viola’s arrival, and her certainty that Victor must be her Prince Charming after she dances with him at a ball, is the spark that changes everything. Lives change, conventions are broken and opportunities are seized.

Stella Gibbons tells a lovely, complex tale with all of the wit and humour you could want, and she balnces that perfectly with real understanding, real emotions, and just a light sprinkling of fairy dust.

This is the third of her novels that I have read, and I really have grown to love the way her authorial voice is always present but never obtrusive, and the wonderful trick she has of seeming to be heading down a traditional, well trodden path, only to head off somewhere different and rather more interesting at the last minute. That really is clever.

This time around her pace seemed a little slow, but it is was worth lingering because there are so many lovely details, dialogues and observations, and some telling points are made about the class system, the lack of opportunity for women and the difference that money makes

But what held everything together was wonderful characterisation, and I continued to be engaged no matter which of the diverse cast was taking centre stage. Such a wonderful variety of people, relationships, and things going on!

I willed Tina on as she took tentative steps to deft convention and make her relationship with Saxon official. I laughed as Madge entertained the huntin’, shootin’, and fishin’ brigade. I worried about Hetty’s future. And I wondered if Victor really was Prince Charming, if he was good enough for Viola.

The ending was in doubt until the very last minute, but when it arrived it was perfect and there was a little sting in the tail.

The perfect ending for a fine entertainment and a lovely piece of social comedy.