Now, how do I explain this one? It’s not my usual sort of book at all. But that’s the thing about loving a publisher – sometimes you’re inspired to buy something quite extraordinary.

Not, you understand, that I have anything against Italian graphic novels from the 1960s!

Poem Strip is a remarkable retelling of the classical tale of Orpheus and Euridyce. 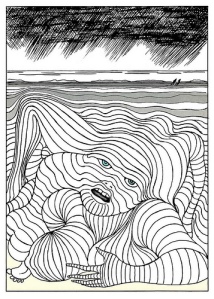 The story opens in Milan:

Opposite that house is the home of an old, aristocratic family. Orph, the son of the house, has broken with tradition: he is a wildly successful rock star.

One day as he watches the world going by from his window he sees Eura, the love of his life, enter the the house across the street through a door he has never seen before.

Unthinking, he follows her: Orph enters the underworld. Sex and death hang heavy in the air, and Orph must fight temptation and face his worst fears as he seeks his lost love.

And he would have to sing for his life.

“Death, oh death
Gift of a wise god
All the charms of this world
Come from you
Even love.”

The images are varied and striking; the words are simple but effective.

The overall effect was deeply unsettling and utterly compelling at the same time: I read Poem Strip in a single sitting and it has left a very firm impression.

And I’m quite sure that there are things that I missed, more layers that a second reading might reveal.

….. hosted at Coffeespoons and the Literary Stew.