February 25, 2010 By Fleur in her World in Book Reports Tags: Jane Casey 6 Comments 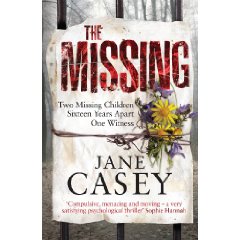 Sarah’s childhood was destroyed when Charlie, her older brother went missing. One minute he was there and the next minute he was gone. Sarah was the last person known to have seen Charlie, and her mother has always believed that there was something that Sarah knew and would not tell, and blamed Sarah for the loss of her son.

Her mother turned to drink and her father left, and then died. Sarah stays to support her mother. A woman who shows no care, indeed shows disdain and even contempt, while she maintains her missing son’s bedroom as a shrine.

Now Sarah is a teacher. And a twelve-year-old girl from one of her classes, has gone missing. Again Sarah is again one of the last people to have seen the missing child. And then Sarah finds a body.

Old memories are stirred up. Sarah tries to help, and help she does, but that draws her further and further into the case. Are the two disappearances linked? And is it Sarah that links them?

Both stories are compelling and, though they are disturbing, it is quite impossible to stop turning the pages.

It works well because the characters, their motivations, their behaviour, are so well realised. There’s a good sized cast – teachers, pupils, neighbours, police, media – and it’s well used, but this is Sarah’s story. And although there were moments when I wanted to give her a good shake and point her in a different direction, I understood why she did what she did. And I felt for her when she wanted to help, when she wanted to reach out to the parents of the missing girl, but had to hold back. She couldn’t keep away from the case though, and that led her into trouble.

The story rings true. The details are right, and the twists, when they come, are in no way contrived. They flow naturally out of that story. And just as you think you have things figures out something else comes to light that makes you think again. It really is very well judged. Yes, there are one or two things that you know should not happen, particularly when Sarah finds out too much, but Jane Casey just about gets away with it, because the characters, the psychology and the emotions are always right.

Well she gets away with it until the ending. Overblown and melodramatic. Such a shame, because a striking, low-key ending that would have fitted the book perfectly was there for the taking. And after the way she handled the rest of the book I am quite sure that Jane Casey could have pulled it off.

That ending downgraded this from a great psychological mystery to a good one. But it’s still a fine debut, and I don’t doubt that Jane Casey has the potential to produce something top class before too long.