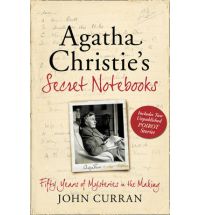 “In August 1948 Penguin Books made publishing history when they issued one million Agatha Christie novels on the same day – 100,000 copies of each. This venture was such a success that it was repeated five years later.”

That’s an awful lot of books. And how many more have been sold – and borrowed – since then? How many films? How many television dramatisations? Amazing numbers!

You would think that everything to be said had been said by now. But no! This lovely book offers something new.

A few years ago Agatha Christie’s heirs decided to pass The Greenaway, her riverside home in south Devon, to the National Trust. When the Trust started to renovate the property its former owners notebooks came to light. Seventy three of them!

Not orderly notebooks but notebooks that were grabbed when the need to write anything down arose. Shopping lists. Character lists. Story ideas. Random thoughts. There’s an awful lot there, but not everything. Many works are unmentioned. So presumably Mrs Christie lost notebooks and wrote things on the backs of envelopes like the rest of us.

John Curran has done a wonderful job of organising the material to give a picture of how many well-loved books developed. They grew in all sorts of ways. From a character. From a setting. From and object. All sorts of things changed along the way, and very often the murderer and their motive wasn’t settled on until the very last moment.

He is clearly very knowledgable and, while he clearly loves Mrs Christie’s work, he is quite prepared to step back a little and be objective.

There are so many wonderful little facts. Gems are scattered throughout the book. Cases transferred between Poirot, Miss Marple and Parker Pyne (I’d forgotten him). Ideas picked up, dropped, and then sometimes picked up again for another story. Characters changing names and evolving. It really is fascinating.

And so I find myself reminded of books I’d quite forgotten. Happily recalling others. noting a few that I don’t think I’ve read yet. I want to read and re-read every single one. And then I want to look again at what this book had to say – I’m definitely going to need a copy of my own!