November 19, 2009 By Fleur in her World in Book Reports Tags: Iain Pears 8 Comments 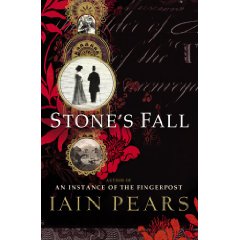 “The church of St Germain des Pres, at the start of what was supposed to be spring, was a miserable place, made worse by the drabness of a city still in a state of shock, worse still by the little coffin in front of the altar which was my reason for being there, worse again by the aches and pains of my body as I kneeled.”

I tried to resist “Stone’s Fall“. Such a big book – 590 pages – I really didn’t have the time, or the space on my library ticket. And I hadn’t been that taken by “An Instance of The Fingerpost“, my only previous encounter with Iain Pears.

But Jackie had written such a glowing report that I just had to pick it up and take a closer look. I opened the pages, read those words and was immediately hooked. Home it came!

I am so glad that it did.

The central question is simple: How and why did the wealthy and powerful industrialist John Stone come to fall to his death from the window of his London home? The answer is anything but.

First there is a prologue, set in Paris in 1953. Two men meet after a funeral. It is short and simple but it sets the tone beautifully and provides a firm basis that will hold together what is to come.

In 1909 John Stone is dead, in 1890 he features in another man’s story, and in 1867 he tells his own story. Three engaging and distinctive narrators.

Stories told backwards rarely work for me, but this one did. The plotting is so well executed, with all of the twists and turns rooted in the history of the characters.

What wonderful characters! Wonderfully observed and utterly intriguing. Settings too, vividly evoked. This is definitely one of those books where you can hear the voices and see the scenes in your head.

There is much going on: financial, industrial and political intrigue; mysteries and investigations; and a striking love story. It all works together beautifully.

And all of this in lovely, cool, clear prose.

For most of its pages “Stone’s Fall” is a story for the intellect, but at key points the emotions were perfectly pitched, and they hit hard.

The story was long and involved, but it held on to me right up to a startling conclusion that shifted my perceptions and made me rethink many elements of what had come before.