November 5, 2009 By Fleur in her World in Book Reports Tags: Liz Jensen 2 Comments 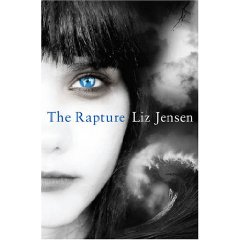 “That summer, the summer all the rules began to change, June seemed to last for a thousand years. The temperatures were merciless, thirty-eight, thirty-nine, then forty in the shade. It was heat to die in, to go nuts in, or to spawn. Old folks died, dogs were cooked alive in cars, lovers couldn’t keep their hands off each other. The sky pressed down like a furnace lid, shrinking the subsoil, cracking concrete, killing shrubs from the roots up. In the parched suburbs ice cream vans plinked their baby tunes into streets that sweated tar. Down at the harbor, the sea reflected the sun in tiny, barbaric mirrors. Asphyxiated, you longed for rain. It didn’t come.”

It’s quite an opening paragraph to a book packed full. At its simplest The Rapture could be called a post apocalyptic psychological eco thriller. But it’s so much better than that sounds and there’s so much more going on.

Let’s start at the beginning. With one of the most interesting fictional characters I have met this year.

Gabrielle Fox. Two years ago Gabrielle was in a serious car accident. Her married lover and their unborn child were killed and Gabrielle’s spine was irreparably damaged. Now she takes on the world from a wheelchair. She’s dealing with the physical scars, but not, it seems with the mental scars.

She’s decided to make a new start in a new job in a new town. She’s an art therapist, and has taken a position at the Oxsmith Adolescent Secure Psychiatric Hospital, a troubled institution on the south coast of England.

Gabrielle’s story was, for me, one of the strongest elements of this book. Her emotions, her reactions, her defence mechanisms, her coping strategies are all utterly believable and, although they are not integral to the main thrust of the story, they work with it very well.

At the Oxsmith she finds that her case load includes one particularly notorious inmate: Bethany Krall.

Bethany is the daughter of a famous evangelist, figurehead of the Faith Wave movement, which grew into a major force against a background of worldwide environmental extremes, terrorism, economic turmoil and fear.

Her mother is dead – brutally murdered by Bethany.

Now she is a difficult patient at Adolescent the Oxsmith: she has major mood swings, psychotic fantasies and biblical outpourings. She has attempted suicide, attacked other patients, and seen off more than one therapist with her startling insight their lives. The hospital has responded with electric shock treatment.

And Bethany has predicted ecological disasters with pinpoint accuracy.

It is a measure of Liz Jensen’s skill that she is able to make Bethany intriguing and compelling, without ever losing sight of the horror of what she has done.

In many ways this is a difficult book. In the hands of another author I might have been disinclined to read on, but this author judged things perfectly.

There is much detail throughout this book and it is all pretty much perfectly pitched.

The head of the hospital is dismissive of Bethany’s predictions, but her former therapist believes that she can see the future. Gabrielle isn’t sure, but she is sure that she wants to go on working with Bethany.

She talks to a scientist, who is interested, in Gabrielle and in Bethany’s predictions. Inevitably, word gets out, setting off a series of dramatic events and building to a dramatic conclusion.

But your attention is held from start to finish by two intriguing women and the extremely well-handled multi-stranded plot. And by some wonderful prose.

Some difficult subjects are handled with great intelligence and sensitivity.

The Rapture is not an easy book to read – or to write about – but I’m glad I did.