September 26, 2009 By Fleur in her World in Book Reports Tags: Nicola Upson 5 Comments

I hestitated over Nicola Upson’s first novel, An Expert In Murder, for a long time in the library.

The cover was eye-catching. The premise was intriguing. Writer Josephine Tey travels to London for the premiere of her play, only to witness a muder in London’ theatre-land. The murder is investigated by her friend (and the man on whom she based her own detective, Alan Grant) Archie Penrose.

My concern was over whether it was right to use a relatively recent real person as a fictional character.

In the end I did bring the book home, and I was glad I did. The plot was clever, the setting was well evoked and the blend of fact and fiction was well done.

I looked forward to the next entry in the series, even more so when I discovered the setting was my native West Cornwall.

Inspector Archie Penrose has invited Josephine Tey to stay at his diapidated family estate on the Cornish coast. She has been struggling with her new novel, and hopes to find inspiration in her new surroundings.

She finds rather more than that!

Her arrival coincides with the funeral of a young estate worker, killed in a strange riding accident at a lake said to claim a life every seven years.

Then a local boy disappears.

And then there is an audacious murder at the Minack Theatre – an open-air auditorium carved out of the cliffs.

Drama indeed! Archie is obliged to investigate and finds his loyalties split between his friends and neighbours on one hand and his professional obligations on the other.

The plot twists and turns. A wide range of characters and locations are vividly evoked. The twist at the end is startling. There is much to praise, but I didn’t enjoy this book as much as An Expert in Murder.

The problems? There was much too much going on in one small village community, and the Tey-Penrose team didn’t work as well as it did before, and didn’t quite seem to belong.

Could be though that I just know the locations too well!  But just look at the Minack Theatre. 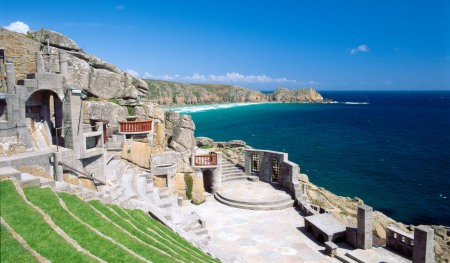 Isn’t it wonderful?! It could have been the scene for a great mystery, but I’m afraid Angel With Two Faces doesn’t quite make the grade.

It’s only fair to say though that Nicola Upson can write, construct a mystery, create great characters and evoke settings. I’d love to see what she could do without the constraints of a series.