September 10, 2009 By Fleur in her World in Library Talk 8 Comments

My library scales are somewhat out of balance this week. Four new books brought home and ony one returned – well Wolf Hall was a very big book! Anyway, that means that this is defininitely going to be a catching up with library books weekend:

Here’s the quartet I just had to bring home: 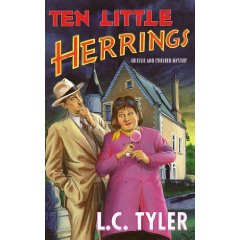 “When obscure crime writer Ethelred Tressider vanishes, his dogged literary agent, Elsie Thirkettle, is soon on his trail. Finding him (in a ramshackle hotel in the French Loire) proves surprisingly easy. Bringing him home proves more difficult than expected – but (as Elsie observes) who would have predicted that, in a hotel full of stamp collectors, the guests would suddenly start murdering each other? One guest is found fatally stabbed, apparently the victim of an intruder. But when a rich Russian oligarch also dies, in a hotel now swarming with policemen, suspicion falls on the remaining guests. Elsie is torn between her natural desire to interfere in the police investigation and her urgent need to escape to the town’s chocolaterie. Ethelred, meanwhile, seems to know more about the killings than he is letting on. Finally the time comes when Elsie must assemble the various suspects in the Dining Room, and reveal the truth.”

Ethelred and Elsie are back! I am so pleased to be meeting them again!

A Tale Told by Moonlight by Leonard Woolf

“An after-dinner walk in the moonlight leads to a series of confessions of first loves, each one sentimental, romantic. That is until Jessop takes his turn and decries the very notion of love itself. He speaks of a tragic affair between an old schoolfriend of his and an innocent Sinhalese girl, and so introduces the central motif of these three stories – the incompatibility of East and West.”

I was intrigued by Tracey‘s review of Leonard Woolf’s The Wise Virgins, and so I looked for it in the library catalogue. that book wasn’t there, but this one was.

Hold My Hand by Serena Mackesy

“It was the answer to their prayers: a cash-in-hand residential job in the country, in a place where no one would know them. To Bridget Sweeny and her daughter it meant a fresh start, with new names and hope for the future. But Rospetroc House, the manor house Bridget has agreed to caretake, has its own secrets: a history of high staff turnover and a reputation in the village, and it’s not long before she begins to feel uneasy. Rising star Serena Mackesy’s new novel tells intertwining tales of Lily, a nine-year-old East End child evacuated during the Great War and left in the unwelcoming arms of the dysfunctional Blakemore family, and of Bridget Sweeny and little Yasmin, who have their own urgent reasons for leaving London. The lives of the three connect across the decades in a chilling tale of murder and revenge on Bodmin Moor.”

Serena Macksey is one of those authors whose books are always different and always very readable. So this one had to come home.

“Compiled by Charles Dickens, Mugby Junction is a intriguing composite of tales ranging from horror to a realistic portrayal of life around a bustling Victorian railway station. Published for the first time in its entirety, it contains one of Dickens’s most celebrated ghost stories, The Signalman. Arriving at Mugby Junction in an attempt to escape his unhappy past, Barbox Brothers befriends a workman and his invalid daughter. With their help he sets his sights on discovering which of the seven lines of the junction will most aid him in his journey of escape. In exploring one such line, he meets ‘the woman he had lost’, only to return to Mugby Junction once this has played out. Staying there, and continuing his friendship with the workman and his daughter, he collects together the myriad stories he hears tell of at the junction.”

I’m steadily working my way through Dickens’ shorter works, and I’ve had this one in mind for a while for the R I P Challenge.

Have you read any of these? What did you think of them?