What is a Persephone Book? Well I could just say ” a sheer delight” and it would be true, but I think I shall elaborate a little. So what I’m going to do is consider the books as beautiful objects today and then take a look at what lies within tomorrow.

A Persephone Book is a well bound softback book. The paper is of excellent quality and so often when you look inside you will find a shorter book than you may have expected, because the paper is thicker than the norm.

It is dressed in a dove-grey dust jacket. The front cover and the spine each have a very discreet logo; and the title and the author’s name in a cream box. 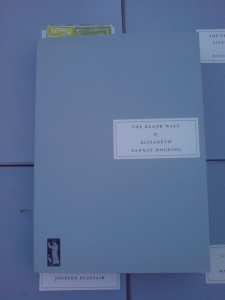 The back has the logo too, plus the book’s serial number in small black type.

The book that you can see in the pictures in number 41 in the series – The Blank Wall by Elizabeth Sanxay Holding.

But what do you find when you open that cover?

Well you will see a quotation from the book on the dust jacket flap:

“She got a book and read it in bed with stubborn determination. It was a mystery story she had got out of the lending library for her father, and she was not fond of mystery stories. Nobody in them ever seemed to fell sorry about murders, she had said. They’re presented as a problem m’dear her father said. What’s more they generally show the murdered person as someone you can’t waste any pity on. I’m sorry for them she said, I hate it when they’re found with dagger sticking in them and their eyes all staring from poison and things like that. Yet how little pity did she feel for Ted Darby! I relly did that, she thought amazed. I concealed a body. Anyhow I took it away. And when I ame back – after that – nobody could see anything wrong with me – anything queer. Maybe I haven’t got so much feeling, after all. Maybe I’m rather too tough. I’d better be too, she thought, as she rose and started to dress.”

And on the back flap you will find some biographical information about the author:

“ELISABETH SANXAY HOLDING (1889-1955) was born and brought up in New York and educated at Miss Whitcombe’s and other schools for young ladies. In 1913 she married George Holding, a British diplomat. They had two daughters and lived in various South American countries, and then in Bermuda, where her husband was a government official. Elisabeth Sanxay Holding wrote six romantic novels in the 1920s but, after the stock market crash, turned to the more profitable genre of detective novels: from 1929-54 she wrote eighteen, as well as numerous short stories for magazines. In 1949 Raymond Chandler chose her as ‘the best character and suspense writer (for consistent but not large production)’, picking The Blank Wall (1947) as one of his favourites among her books; it was filmed as The Reckless Moment in 1949 (by Max Ophuls) and as The Deep End (with Tilda Swinton) in 2001. After her husband’s retirement the Holdings lived in New York City.”

But before you read any of that you will have stopped to admire the beautiful endpapers. They are all based on fabrics and they will always be relevant to the book.

In this case the design is from late forties furnishing fabric. Contemporary with the book of course.

And you may find a bookmark inside your Persephone book. It will only come with your book if you order it direct from Persephone, but if you get in touch you can order a bookmark if you have a book without one.

The bookmark is made of stiff card, and I have borrowed the bookmark from A House in the Country by Jocelyn Playfair so I can show you both sides.

One side shows the same design as the endpaper and the other carries another tempting quotation:

“”My name is Donnelly,” he said. “Yes?” said Luia evenly. Maybe it’s nothing, she told herself. Maybe it’s just about insurance. Or selling war bonds. Or something ordinary. “I’d like a few words with you,” he said, and jerked his dark head toward the open door behing her. ” Well … what about?” she asked, with an attempt at defiance. He reached past her and closed the door. You’ll be wanting those letters,” he said. “What letters?” They were standing close to each other, facing each other; she looked up at him, still attempting that defiance, and he looked at her absently. “The letters your daughter wrote to Ted Darby,” he said. “The price is five thousand dollars. Cash.””

After all of that I am sure that you will be ready to turn to the introduction and then the book itself.

But just one more thing I must mention. Originally all Persephones have been published in the the format I have described, but nine of them have now been published as Persephone Classics. No dust jacket or bookmark, but colourful covers, scaled-down flap information and endpapers and a lower price. They are lovely, but I am a traditionalist and will be sticking with with the dove-grey covers.

Though the Persephone Classics covers are beautiful …

Persephone Reading Week is being hosted here and here.