May 25, 2009 By Fleur in her World in Bookish Acquisitions 5 Comments 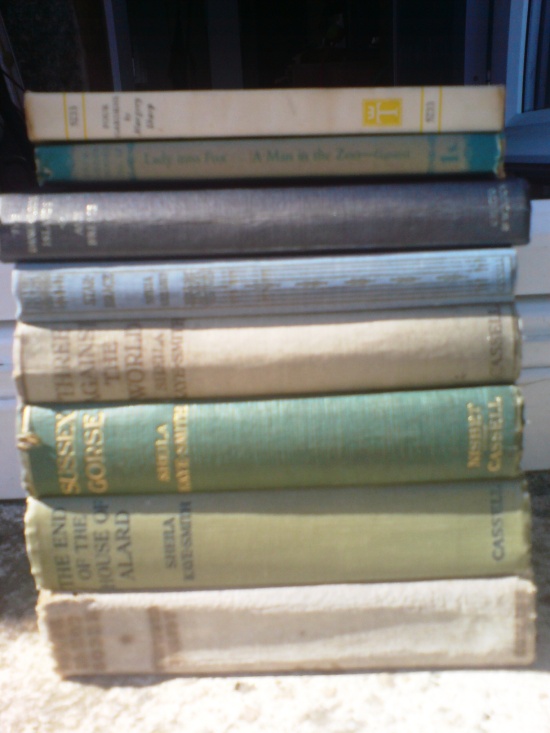 To look at this pile of books you might think they were nothing special, but you would be wrong.

I love a shiny new book as much as anyone, but I love the sense of history attached to an old book too. And I hate the idea of a book being ditched just because it’s a little old and scruffy.

There are often wonderful books to be found in the 50p boxes outside my local used bookshop, so I rushed over when I saw that they had been topped up. Here are the books that I had to bring home:

Lady Into Fox & A Man In The Zoo by David Garnett

I was very taken with the idea of Lady Into Fox when I read about it at Stuck In a Book. It was in library stock and so I ordered it up, but when I read it I knew that I had to have a copy of my own to keep. This is a lovely illustrated  paperback edition from 1940 and it came with a number of bonuses – a postcard from the period, a newspaper cutting about the author and, best of all, A Man In The Zoo, another short work that I haven’t read.

I read The Eye of Love by Margery Sharp last year and fell in love with her writing. Sadly though it is the only one of her works in print, and so I have been ordering others up from the libary’s fiction reserve and picking them up where I can. This book comes from a series I have never seen before – published by in Leipzig in English  as Volume 5233 of The Tauchnitz Edition of British and American Authors. I wonder what other books were in that series and just how this little volume found its way to Cornwall.

The Dangerous Islands by Ann Bridge

Ann Bridge was a diplomatic wife and drew on her travels and experiences to publish twenty six books between 1932 and 1968. Her books were both praised and popular but none are in print now. I have Peking Picnic and Illyrian Spring in my Virago Modern Classics collection and, though I haven’t read them yet, I love the synopses and the pages I have scanned.  I am particularly intrigued by this book because  it was published in the year of my birth (1964) and because thanks are given to the clerk of the council of the Isles of Scilly – we can see the boats and helicopters that travel to the Scillies from our house.

Star-Brace, The End of the House of Alard, Sussex Gorse and Three Against The World by Sheila Kaye-Smith

Isn’t that a wonderful set of titles? Sheila Kaye-Smith is another woman author who was praised and lauded in the 190os but who is no longer in print. Most of her work is set in her native Sussex, and it seems that she was compared with Thomas Hardy and Mary Webb – two of my favourite autors. That plus the synopses from another two unread Virago Modern Classics on my shelves (Joanna Godden and Susan Spray) were more than enough to ensure that I would scoop up any of her books that I came across.

Truth is Not Sober by Winifred Holtby

I have read two of Winifred Holtby’s novels, The Crowded Street and South Riding,and they were both quite wonderful. Some of the short stories in this collection are in Remember, Remember!, Virago’s collection of her shrter works – but not all of them! And I am charmed that this copy comes from the Timothy Whites Circulating Library of Fareham and dates back to 1935.

A wonderful haul for just £4 !